admin
This week on the Rewind, Warzone’s “anti-cheat” update, a FaZe Manager possibly behind the crypto scams, and the dumbest team in Valorant.

Warzone released their first “anti-cheat” update, which consisted mainly of announcing they had banned 50,000 new accounts for hacking, and immediately got blasted for still not having a real anti-cheat. Mutex said he ran into 7 hackers right after the Warzone anti-cheat update, and Nickmercs and dozens of other Warzone pros shared similar stories. With nothing to prevent the cheaters from just making new accounts, it doesn’t seem like the ban waves are doing anything to stop Warzone hacking.

A FaZe Manager may be behind all the crypto scams ruining FaZe Clan’s reputation. In a new video, OrdinaryGamers pointed out that a lot of the crypto currency in SaveTheKids and other pump and dump scams tied to FaZe Clan seems to all trace back to a former Senior Manager in the org. FaZe Banks responded to this latest bombshell by agreeing to let investigators dig through FaZe Clan’s crypto to prove the org itself wasn’t involved.

And in maybe the dumbest cheating scandal in Valorant history, Team Besties was caught 5 different times cheating in one event by swapping in a ringer. From getting caught talking about it on comms, to KD’s suddenly skyrocketing and insane pings, it is possibly the most blatant cheating in esports history, and definitely in all of Valorant Those stories and much more on the Esports Rewind.

Use Code: "Esports Talk" for 25% off Rogue Energy:

Esports Talk is your leading source of gaming and esports news. For more visit our website:

Join our Discord to chat with the team, share stories, and more:

Want to get in touch with us to share a story? Have a business inquiry? Email us at: media@

Esports Talk is an esports and gaming news platform that puts a focus on pro players, teams, creators, and the games that make it all possible. Want to know about the spiciest stories in the scene? The biggest roster moves? The craziest upsets?

You're in the right place.

Esports Talk is proud to be sponsored by Rogue Energy and Respawn Products.

Some links in the description of our videos may be affiliate links for which Esports Talk receives commission on sales. There is no additional cost to the viewer and this is just another way to support our team.

Unless specifically disclosed, Esports Talk is not affiliated with the brands or products discussed or shown in our videos.
#Nickmercs #Warzone #Valorant #FaZeClan 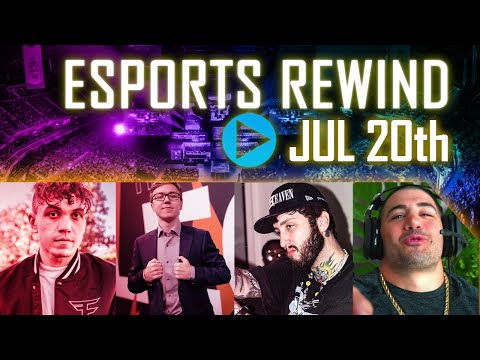 This week on the Rewind, Warzone’s “anti-cheat” update, a FaZe Manager possibly behind the crypto scams, and the dumbest team in Valorant. Warzone rel...