admin
FaZe Teeqo has finally broken his silence after being suspended from FaZe Clan along with Jarvis and Nikan after the SaveTheKids crypto scam.

Coffeezilla and OrdinaryGamers have both effectively cleared Teeqo of wrongdoing in the SaveTheKids crypto scam, saying he was the one FaZe Clan member who was totally clean and still had all his SaveTheKids tokens. But despite being cleared of wrongdoing, Teeqo had remained totally silent ever since his suspension until a tweet on Sunday.

Titled “Goodbye”, the tweet revealed that Teeqo was in a bad place, and that he was going to examine his life and his past decade as a FaZe clan member, and just step away for a while. Teeqo said he was going to be gone for some time, and that he needed to take care of himself before he did something really stupid.

Teeqo also promised a video this week with more answers as to what his “going away” would really mean. Will he officially leave FaZe Clan? Is he done making content? Or is he just taking several months off to get himself in a better place? We will have those answers soon, and until then, we just hope Teeqo can find some peace.

Use Code: "Esports Talk" for 25% off Rogue Energy:

Esports Talk is your leading source of gaming and esports news. For more visit our website:

Join our Discord to chat with the team, share stories, and more:

Want to get in touch with us to share a story? Have a business inquiry? Email us at: media@

Esports Talk is an esports and gaming news platform that puts a focus on pro players, teams, creators, and the games that make it all possible. Want to know about the spiciest stories in the scene? The biggest roster moves? The craziest upsets?

You're in the right place.

Esports Talk is proud to be sponsored by Rogue Energy and Respawn Products.

Some links in the description of our videos may be affiliate links for which Esports Talk receives commission on sales. There is no additional cost to the viewer and this is just another way to support our team.

Unless specifically disclosed, Esports Talk is not affiliated with the brands or products discussed or shown in our videos.
#FaZe #SaveTheKids #Teeqo 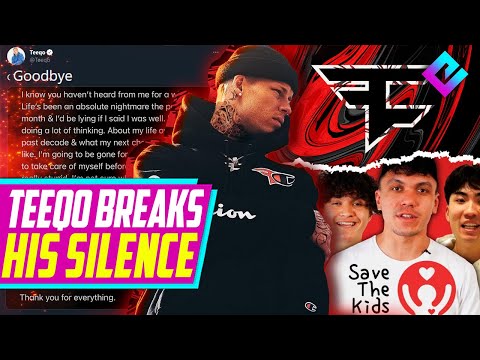 FaZe Teeqo has finally broken his silence after being suspended from FaZe Clan along with Jarvis and Nikan after the SaveTheKids crypto scam. Coffeezi...